Culinary students gain valuable experience in the kitchen and beyond

Applying what you know to a real-world situation helps to cement that knowledge. Culinary students at the Center for Career Services this year have an opportunity to use their skills, while also gaining valuable work experience.

Through her job experience at the Bonnie Briar Country Club in Larchmont, Arden Gerhardt, a junior at Pelham Memorial High School, has learned different styles of cooking and gained experience with differing sauces and food pairings. She has also taken what she has learned at BOCES and applied it to her job.

“I definitely feel the experience here brings a different level to work, a whole other standard at work,” she said.

Culinary teacher Chef John Damiani has placed a record number of his students in restaurant settings this spring. His goals were to place students in jobs where they could expand the skills they learned in the culinary program while gaining experience in the industry. He has a total of 15 students who are currently placed in summer jobs, many of whom have already started working, at area country clubs and restaurants. 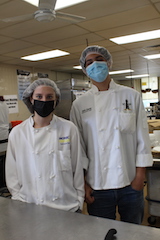 Arden and Antonio Licea, a junior at New Rochelle High School, are two out of many students who have found placements. They are both working at the Bonnie Briar Country Club in Larchmont. They work on a rotation, enabling  them to gain experience working in different parts of the restaurant, including front and back of the house.

Arden, who is currently working in the front of the house, said it’s been a great opportunity.

Arden said she has enjoyed bussing tables, although at times it can be stressful.

Antonio has been busy with a stint in the kitchen, where he has assisted the Garde Manger, an individual in charge of cold foods, and has also worked running the club’s pizza stand.

“At times, when we are really busy and the cooks need help, they will ask me,” Antonio said. “It gets really busy, especially on Friday nights.

Arden said some of the work she has done includes keeping the works station clean and refilling anything that has run out, such as cutlery and condiments.

Antonio has noticed the passion among the chefs he has worked with at the club, something he has brought back to the BOCES kitchen.

“You learn you have to have everything done right, but quicker,” he said of his job. “She and I were always slow,” he said of Arden. “Now we are in the oven in about 10 minutes before the others,” he said of his classroom experience. “Over here it’s way more chill. I like working under high pressure.”

Both students were inspired to enroll in the BOCES culinary program by family and friends. Arden’s sister was in the culinary program and Antonio’s godbrother was attending and convinced him to join him. Neither one regrets the decision.

“I thought I was going to hate it,” Antonio admitted, only to be proven wrong. Based on his first year, he hopes to one day open his own fine dining restaurant. “I feel like I’ve learned so much more than I thought I would.”

“It teaches you important skills, so you are not always eating Hot Pockets,” Antonio said.

He has even gone on to develop his own recipes.

Arden also has plans to continue in the industry. She wants to earn an associate’s degree in baking and pastry from the Culinary Institute of America and one day work at a Disney park or resort.

Due to her experience at BOCES, she cooks at home just about every night.

The jobs have also assisted students in earning their ServeSafe certification, a revered industry certification focused on food and kitchen safety that also gives students a leg up when they apply to college, Chef Damiani said. The certification is administered by the National Restaurant Association in all 50 states. Some states require restaurant managers to have the certification, which needs to be renewed every five years.

“It’s the first time doing this with the kids this year,” Chef Damiani said of the certification. Students were required to take an exam, which was administered in May.

“I have a really good group of kids this year. They are interested in the program and hard-working,” he said.

And others have noticed.

Chef Damiani received an email from Chef Matt O’Connor, CEC, one of the chefs his students are working with at the Bonnie Briar Country Club, that said, in part: “The kids are doing great so far. We are almost through our first rotation and they have such a positive attitude, work hard, don’t complain and are eager to learn. They are a pleasure to have. I hope they all come back for the 2022 season and grow here.”